You are here: Home / All posts / How to turn criticism into an opportunity to strengthen your child’s emotional intelligence

It has often been said that it takes a village to raise a child. Problem is, others may not agree with how you choose to raise your child, and you won’t always be able to control how they consider a child “should be raised”.

Inspired by John Gottman ’s studies, “Emotion Coaching” has been found to lead to fewer behavior problems, better academic outcomes, better self-regulation, and greater emotional and physical health. Put differently, there is no doubt that treating your child’s emotions as valid and understanding that his ability to freely express them goes a long way in developing his emotional intelligence.

That said, not everyone will agree with how you choose to foster this emotional intelligence. For instance, it is not uncommon to have to deal with others’ remarks to your child such as “big boys don’t cry”, “stop crying, it’s nothing”, “that didn’t hurt”, “stop being a cry baby” “be a good girl”, “stop sulking”, and so on. The biggest problem is that most of these remarks are often made by close friends and family, and it is not always easy to know how to react in the heat of the moment.

1) Turn criticism into an opportunity to talk about emotions

Different researchers agree that teaching kids to identify and verbalize their own and others’ emotions is critical to the development of their emotional intelligence. In the face of criticism around your child’s emotion-driven behavior, turning that situation into an opportunity to talk about emotions can be a powerful tool towards the development of his emotional intelligence.

For instance, you could say something like “you know when people are angry/frustrated/tired/stressed, they sometimes say or do things that they don’t necessarily mean. Like earlier today when… said …, maybe she was angry because …” or “Do you sometimes say things you don’t mean when you’re angry or tired. Maybe that’s why… said …” or “even in school sometimes your friends will say something because they’re mad/frustrated/sad but that’s just their emotions talking”

2) Show your child you disagree with the negative criticism

The wounds inflicted in childhood are among the most difficult to heal. Criticism, especially when frequent, can have a negative impact on your child and transform how she views herself. Studies on the Pygmalion effect have repeatedly shown that we all tend to act in line with what we believe is expected of us.

You child is more likely to be clumsy around people who think of her as clumsy, and more “aggressive” around people who describe her as aggressive. Criticism can thus teach your child to develop a negative self-image, and this can follow her beyond the childhood years.

The good news is that you can turn criticism into an opportunity to help strengthen your child’s self-esteem. For instance, you could say something like “you remember when … said you’re a cry baby? I don’t agree with her. I think you were…”. Then, you could also take advantage of the opportunity to help her explore other ways she can express her emotions… “You know I’d also be sad if …but there are other things you can do if that happens again.”

If you are already working with your child on appropriate ways to deal with difficult situations, this may be an opportunity to discuss possible solutions… “What do you think you can do if the same thing happens again?” If not, it can be an opportunity to explore different and appropriate ways your child can learn to react to difficult situations by herself.

3) Stand by your beliefs

It doesn’t matter how you decide to raise your child – someone, somewhere, will think you could be doing a better job.

One of the hardest things about criticism is that it often comes off as a personal attack on our parenting skills. And sometimes it makes us question whether we’re raising our kids right, and whether or not we’re “good enough parents”. But here’s the thing: there will always be someone to criticize your parenting choices and it is impossible to conform to everyone’s idea of a “perfect parent”. So, stand by your parenting strategy, but do not go into defense mode. Keep your responses short – “this is how we do it” or “we’re teaching… that it’s okay for boys to cry” or “no, she’s not acting like a brat, she’s just mad because…”

Do not go into an in-depth discussion in an attempt to convince others to see things your way in the heat of the moment – it rarely works. A criticizer is unlikely to listen if she feels you’re trying to humiliate her. But that does not mean you shouldn’t confront the person, especially if she is someone you see often, and if she repeatedly criticizes your child. When everything is calm, you could say something like “I really appreciate … but … responds best when we’re warm and receptive”. Or, “I’m really sorry but it’s getting harder for us to come visit because every time I feel like you’re criticizing my parenting and XXX feels like you don’t like him”.

4) Distance yourself from consistently negative criticism

Discussions do not always work, and if negative criticism is straining your relationship and affecting your child, it might be time to distance yourself from the critical person. The thing is, you can’t always change how people perceive things, but do not allow them to change your fundamental principles. It you feel that some people are toxic and have a negative impact on your child, do not hesitate to cut them out of your life.

5) Teach your child to be his own advocate

The first thing is to help him learn to understand that emotions have an impact on his behavior, but also on how others react to our behavior. Using age-appropriate games is an effective way of helping kids learn to identify and express their emotions more effectively.

Like I mentioned earlier, your child must know that others’ reactions to his behavior are also emotion-driven. For instance, you could say something like “you remember when… said…, I don’t think she meant it. I think she was reacting like that because… Like the other day you remember when I told you to … and you yelled you hate me because you were upset. Sometimes when we’re angry or frustrated, we do or say certain things that we don’t really mean.”

To take things further, you can give him examples of how he can react appropriately to criticism. For instance, you could say something like, “You know it’s not always easy for … to understand you so you can help her next time by telling her you’re angry because you don’t think she’s being fair…” or “you could tell her you’re just upset because no one is listening to you.”

Getting your child to this level takes time, but by repeatedly encouraging him to express the emotions behind his behavior, it becomes easier for him to express those emotions and also understand that others’ reactions are driven by emotions.

One of the most effective ways in which you can help your child learn to regulate his emotions is by helping him understand that emotions are normal – everyone has them – and by helping his identify appropriate ways he can react to his emotions. The “Emotions kit” is an extensive collection of resources designed to give you tools to communicate with your child about emotions. 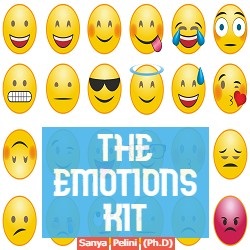 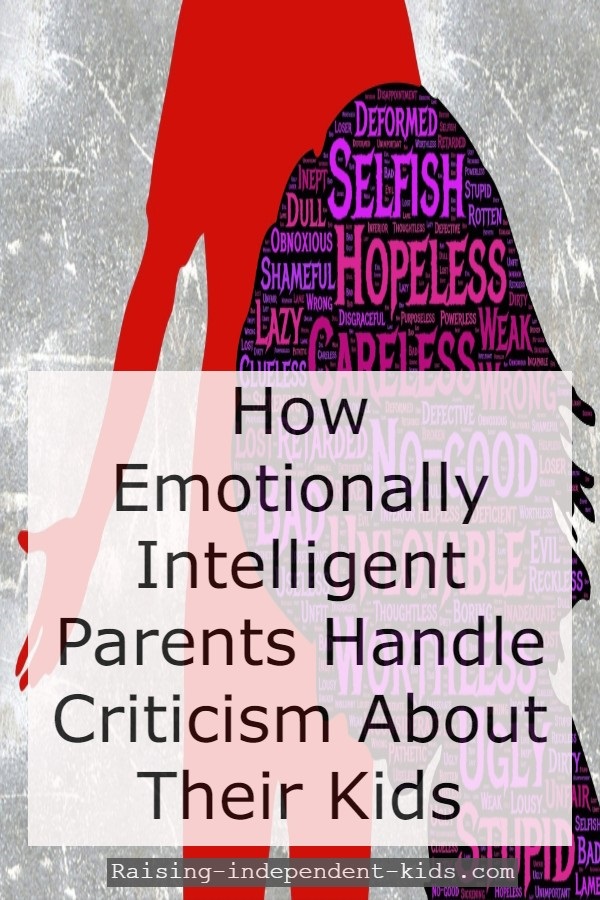