You are here: Home / All posts / This Is How To Raise An Emotionally Intelligent Kid 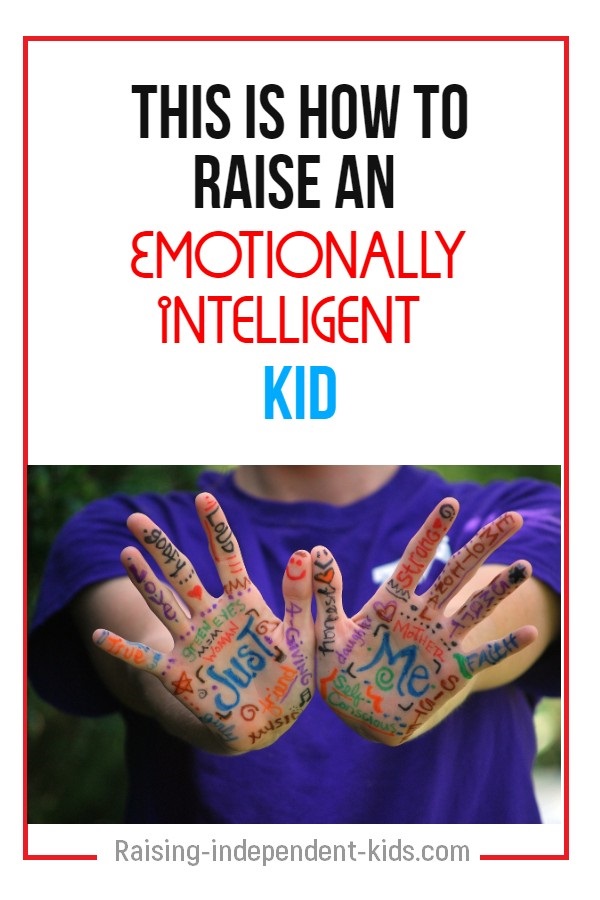 Many years ago, Aristotle said: “Anybody can become angry – that is easy, but to be angry with the right person and to the right degree and at the right time and for the right purpose, and in the right way – that is not within everybody’s power and is not easy.” Back then, nobody spoke about emotional intelligence. It was Salovey and Mayer’s study that brought EQ to the forefront. The two authors said that how we perceive emotions, use those emotions, understand them and manage them ultimately has an impact on our behavior and our satisfaction with life.

It was not until Goleman published his book, Emotional Intelligence, in 1995 that the term EQ was put at the same level as IQ. Goleman says that the more we understand and manage our emotions, the greater our chances of success. He says that our ability to identify our emotions and those of others and how we communicate about our feelings influences how we relate to others.

Other researchers have found that being emotionally intelligent can revolutionize your world. It can change how you view and react to the situations you encounter every day. More importantly, your emotional intelligence also has a great impact on the development of your child’s emotional intelligence. It determines how your child learns to identify emotions in himself and in others, and how he communicates about his feelings.

What separates emotionally intelligent people from people with low EQ?

Goleman says that five components determine whether you are emotionally intelligent or not:

Self-awareness refers to your ability to not only identify your emotions but to also assess those emotions and how they impact your behavior. It also refers to understanding how others perceive you. Self-awareness is also about knowing your strengths and weaknesses.

The self-regulation component of emotional intelligence refers to your ability to exercise self-control. It is the ability to think before taking action and to take responsibility for how you react.

As a parent, self-regulation also refers to your ability to respond appropriately to your child’s behavior, even when you believe that that behavior is irrational. For example, even if your child is in the middle of a tantrum, understanding that his anger is driven by a specific need can make it easier for you to avoid reacting in anger.

Empathy is the ability to sense other people’s emotions and reactions. It is an ability to understand what others need. An emotionally intelligent parent is able to understand her child’s worries and concerns which explain why she acts the way she does.

With regard to emotional intelligence, the social skills component refers to the ability to build bonds with others despite your differences. It therefore requires clear communication skills, problem-solving skills, conflict-resolution skills, an ability to negotiate and good cooperation skills.

Here are four ways to start doing it:

1) Reflect on your own feelings

It is a common misconception that parents, i.e., adults are aware of all their emotions, that they know exactly what those emotions mean, and that they have mastered how to control them. But the truth is many parents struggle with emotions, which explains why we sometimes react obnoxiously to our kids’ behavior or to the comments we overhear. It explains why we react to some of our kids’ normal behavior in anger or take their behavior personally.

Self-awareness, which is the first component of emotional intelligence according to Goleman, is the ability to honestly identify your emotions. You can do this by reflecting on your emotions, or even by keeping an “emotions diary” to help you identify recurring patterns.

Distracting yourself from your emotions can make you feel better, but it does not make those emotions go away. Knowing what ticks you off is the first step if you want to start reacting appropriately to your emotions:

A second important phase in learning about your emotions is identifying recurring triggers and recurring behavior. For example: “When I feel my kid is not listening to me, I get angry and start yelling”.

Understanding what triggers your emotions is important because it makes it easier to deal with those emotions before they get out of hand.

How reflecting on feelings helps your child develop his emotional intelligence

Here are three things you can do to foster emotional intelligence in your kid:

a) Talk about your emotions

Telling your child about your feelings and how they impact your behavior can increase her emotional intelligence. You could say something like “I’m talking faster because I have a meeting and I’m afraid I’m going to be late.” This makes it easier for your child to understand how thoughts, feelings and behavior are connected. Remember that games are also an effective approach to foster the development of your child’s emotional development.

b Do not hide difficult emotions

Hiding difficult emotions does not make you stronger. By hiding your emotions, you lose out on the opportunity to teach your child to manage big emotions. Let your child see your anger but talk about it. Taking responsibility for your anger (I’m angry because) instead of laying that responsibilities on others (You made me angry…) teaches your child to own his emotions.

Treating emotions as normal means teaching your child that everyone has emotions. This means accepting both your child’s and your own emotions and teaching her that having emotions is normal. You could say something like “I know you’re sad. I’d be sad too if…what can we do to make you feel better?” This not only validates your kid’s emotions and teaches him that those emotions are valid, but also gives him an avenue to cope with sad feelings.

Reacting in the heat of the moment often leads to inappropriate reactions and that’s true for both your child and yourself. Instead of reacting immediately, take a pause, then react.

This means taking a moment to reflect on your response before you actually speak. It means understanding how certain emotions may interfere with your judgement and putting aside those emotions to judge a situation more accurately.

As a parent, you can’t reflect on all possible options if you do not understand your emotions and those of your child. In other words, you emotional intelligence can affect your decision-making skills.

How pausing can help develop your child’s emotional intelligence skills

Pausing can prevent you from reacting in anger or from taking situations personally. If you react emotionally, for example by yelling at your kid, you teach her that such reactions are normal.  By modeling calm reactions, you teach your child that it is possible to react to one’s emotions calmly. While pausing might not be a cure against yelling, adopting this practice can help you be more intentional in your response.

Pausing can also help you shape your response more positively. Constructive feedback, rather than criticism, is more powerful in reacting to your child’s behavior because it is often perceived as helpful.

Empathy is a difficult skill to develop in both kids and adults. It refers to the ability to feel or imagine someone else’s pain and to offer help. We now know that even young children can display empathy-related behavior. It is the ability to see things through others’ eyes.

Recent studies have shown that children can develop empathetic reactions relatively early. In one study, researchers found that empathy-related behavior increased over the second year of life. The kids observed were capable of showing empathy-related behavior depending on different situations – they offered hugs or looked sad when they felt that someone was sad or in distress. These researchers also found that by the time children turned three, they were capable of expressing verbal and facial concern in the face of others’ distress.

Empathy is not about validating others’ emotions; it is about accepting that different people can have different perspectives and understanding their feelings or behavior from their point of view.

How to use empathy to nurture emotional intelligence in your child

Modeling empathy can help your child learn about empathy-related behavior. This could be achieved through activities such as helping people whenever possible or even showing empathy in the face of people’s distress (for example friends or even when watching TV).

Reading books about empathy and commenting about other peoples’ feelings depending on their situations is also a powerful way to teach your child empathy and improve his emotional intelligence.

Avoiding labeling your child and labeling others can also help him see things and people from a different perspective.

Teaching your child to be a good friend can help develop his empathy-related behavior. Friends listen to each other, help each other out, accept each others’ weaknesses, deal with conflict appropriately, and so on. Even though not all kids have developed the qualities that make good friends, commenting on their behavior can help them learn to be more empathetic. For instance, you could say something like “Good friends accept each other as they are”.

4) Manage your own emotions

Different things work for different people: workouts, reading, showers, reflecting on the situations sparking those emotions, talking it over with one’s partner or friends, etc. What is important is finding out what works for you.

Managing your own emotions also means being ready to let go of negative emotions and avoiding emotional traps. Being able to deal effectively with people who manipulate your emotions (confront or avoid them) is a sign of emotional intelligence

Modeling appropriate ways to react to emotions can help teach your child how to react effectively to her big emotions. You could say something like “I’m feeling so stressed about my interview tomorrow so I’m going to take a long bath to calm down”.

The more you speak of emotions as states that are normal and manageable, the easier it will be for your child to see them in the same way. Age-appropriate tools developed to help foster your child’s emotional development can also help your child learn to identify her emotions and those of others, what sparks those emotions, how they feel in the body, and different ways through which she can cope effectively with big emotions. 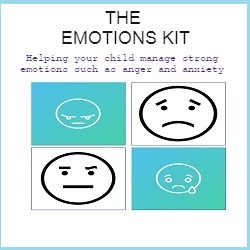 What is emotional intelligence

The developmental origins of a disposition toward empathy: Genetic and environmental contributions. 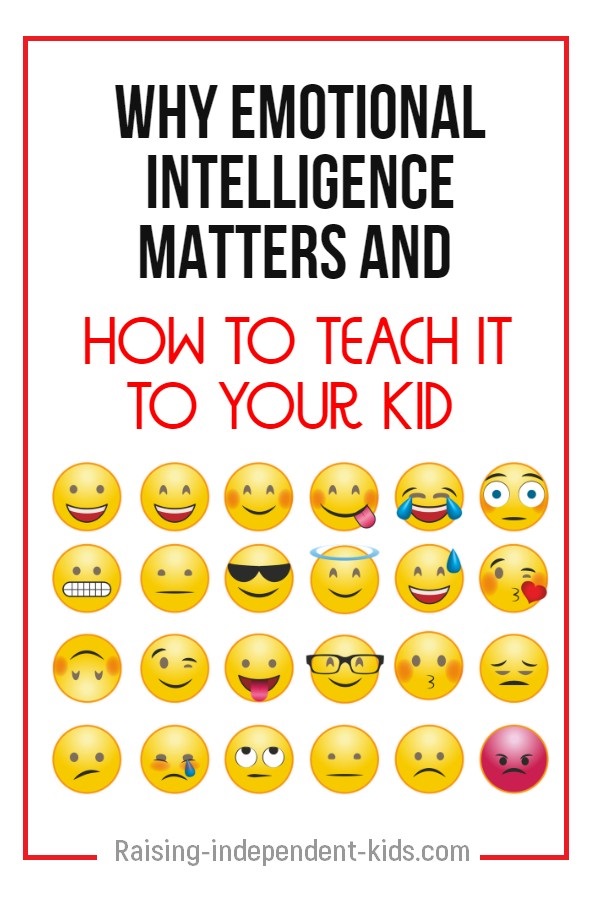